The Woman at the Well and Mary


As you know, I am a Wellness Consultant with doTerra, so, I do quite a bit of research to answer questions about the oils. I decided to research the oils of the Bible and I have learned this about Mary, the woman who poured out a pound of spikenard on the Lord's feet.

Let me talk about one woman to explain the other woman.

The woman at the well went to gather water at a certain hour of the day when she knew no one else would be at the well. The Bible tells us that she had five husbands and the one she was with at the time of this story was not her husband.  Her way of life had caused her to be unaccepted in polite circles, thus, the reason for her going to the water-well after the normal time the women gathered water. Again, she was not going to find herself in a crowd of the respectable women of the town for she probably felt the shame of her situation or was made to feel ashamed and it would have been quite uncomfortable for her to be at the water-well at the same time. But the Lord knew she would be there and He made the journey to be at the well at the time that she would be there so that He could speak to her about the living water that He could give and she would never thirst again. You can read more about her in your bible in the book of John chapter 4.

Now, Mary also was not accepted in polite society for she was a woman of ill repute. So she probably took care not to be in public places where the good women were going to be such as maybe the market or the doctor's office (Oh yes, there were doctors back then for the Bible tells us that Luke was a physician). So, if Mary got sick she would probably have to take care of herself.

And this is what I found about Spikenard oil: helps with anxiety, insomnia, heart conditions, helps with the nervous system, menstrual conditions, digestion, constipation and hemorrhoids, it is anti-fungal, anti-inflammatory and anti-bacterial, and so much more can be said about the health benefits of the spikenard oil.

I believe that Mary probably had bought this oil for if she became sick she could use the spikenard to get well because she would not feel comfortable in going to the doctor's office or perhaps not allowed/accepted in the office (they had stricter ways and ideas back then).

After Mary was delivered of demons and was forgiven of her sins,  she took this spikenard oil with her to Simon's house, inspite of the crowd, she poured the oil on the Lord's feet.

The room did not become still but angry for the book of Mark tells that Judas called it a waste and the book of Luke tells that Simon had thought that if Jesus had known what type of woman Mary was that Jesus would not allow her to touch Him, for she was a shameful woman, and Matthew writes that the disciples were filled with indignation against her.

But Mary poured all the oil that she had set aside for herself in case she would have a medical need, for she had been forgiven of so much and in that forgiveness she no longer had to carry the shame of her past. So, she poured out the shame that filled her heart and soul and she didn't need to keep it on a shelf, in an unopened alabaster box, to remind her of her shame. She poured out her shame, and wept so many tears that the Bible says that she washed His feet with her tears and dried them with her hair. She was so thankful to be relieved of the shame, delivered and forgiven of her sins

The second thing I learned was that now if she became sick she would depend on Jesus for her healing for she believed in Him and no longer looked at the oil as her sole medical resolution for the oil was no more; but the Lord she has always.

No, DoTerra does not carry the spikenard oil but like I said I was studying the oils of the Bible and I learned a few things: I know it wasn't just a costly oil that got poured out that day but a whole lot more. Mary poured out all that she had hidden in her heart that day: the shame of her past as well as her dependency on the oil. God is so good and full of compassion to those who are lost for he asked the angry crowd "Why trouble ye the woman" and to Simon, Jesus replied "for she loved much for she was forgiven much."
Amen.

Both women in this study helped me understand the "what and why's", and hopefully, I helped you understand this bible story.

I am typing this from my phone so please excuse any errors that may have been overlooked.

Post Your Sweet Comments
Labels: bible stories, Bible study, Mary and the oil, the woman at the well

Can You See It? How About Now? 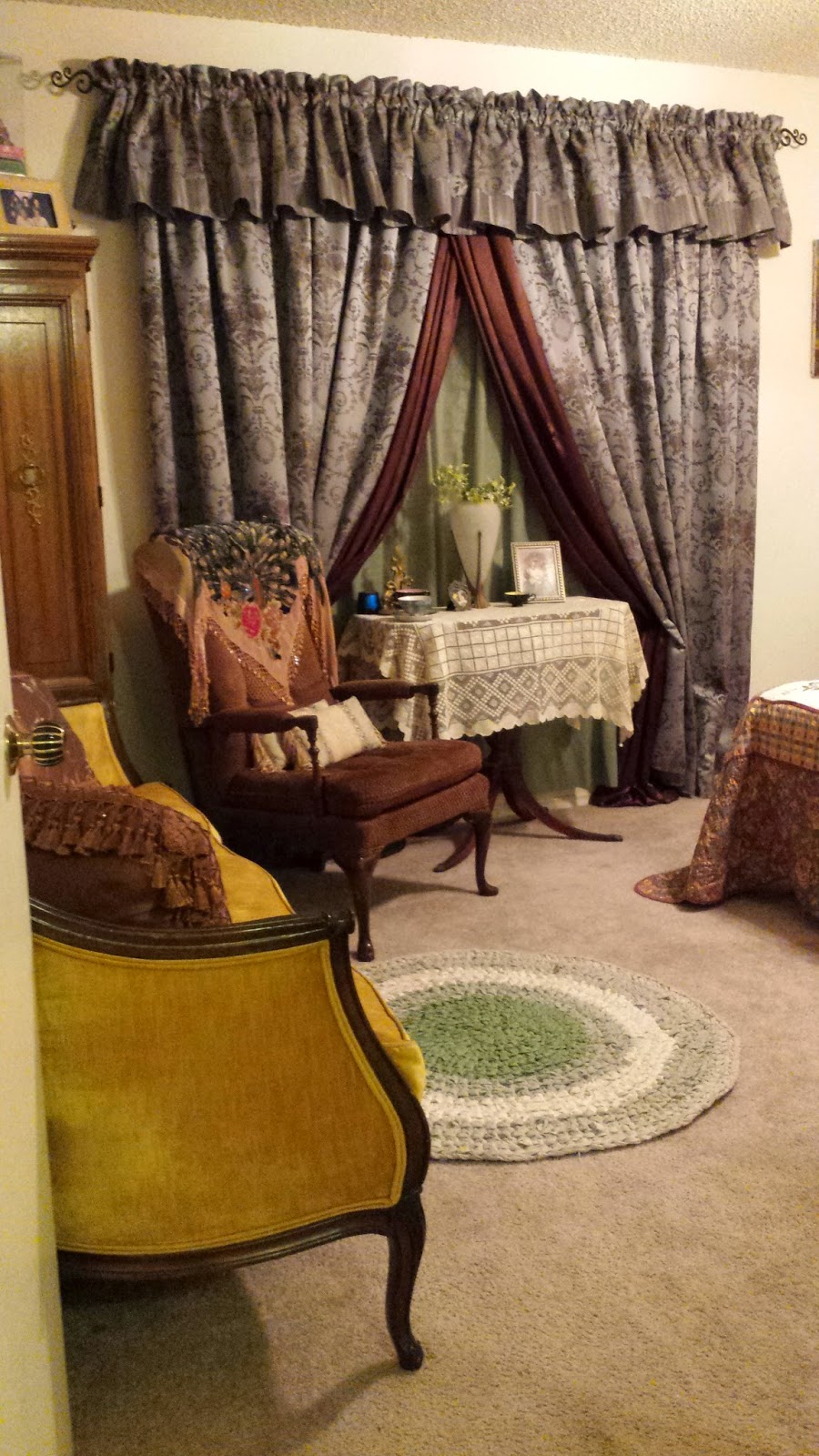 I received a beautiful gift from my sister,  Rosenet. Can you see it in my bedroom?

How about from this angle? Oh, it's so lovely and fits perfectly in my pretend "Bed and Breakfast Dream Room". It's thick and therapeutic and in my colors too. 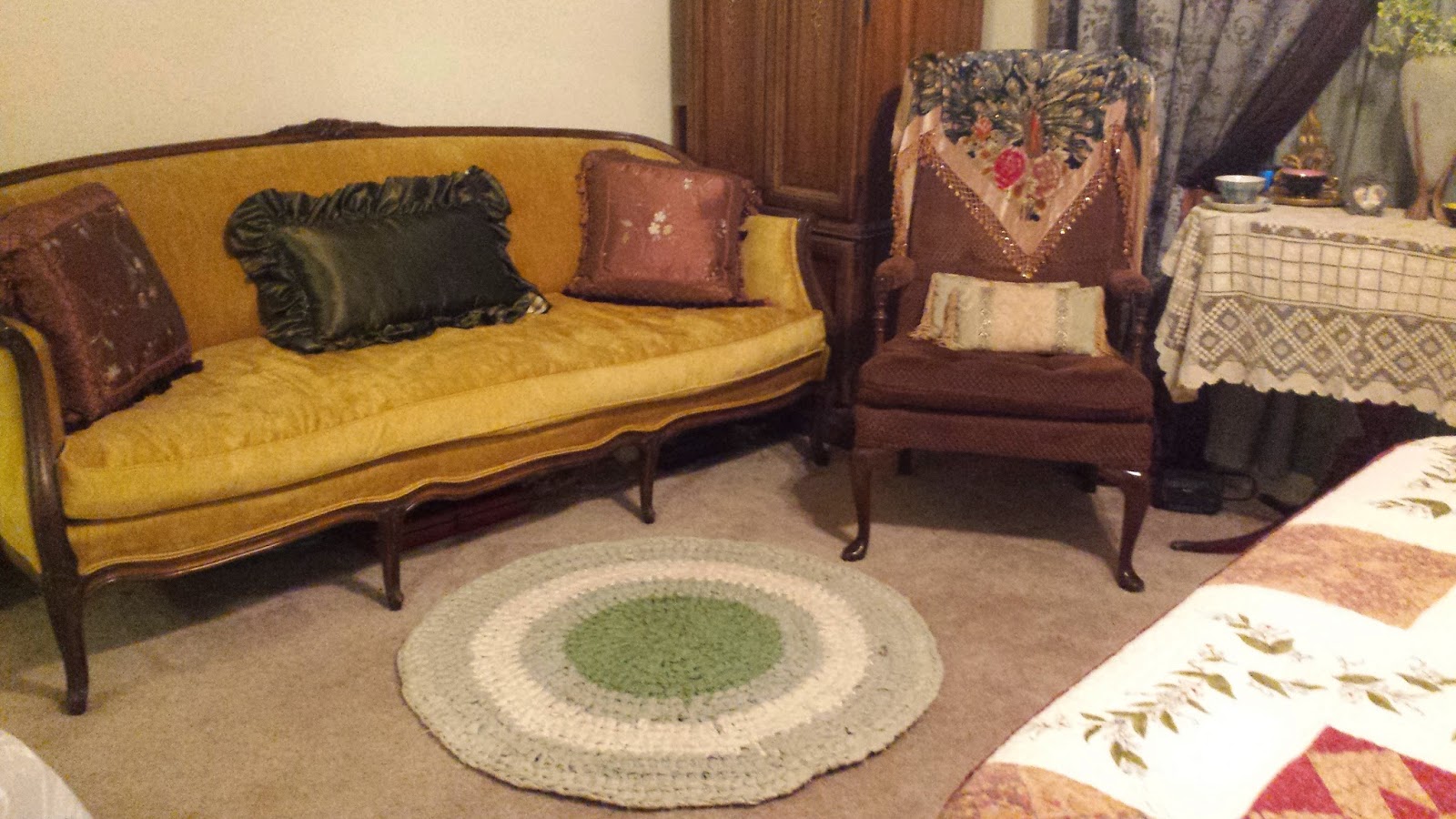 You can sit over here to rest your feet on it. Did you guess what it is? Can you see it? How about now? 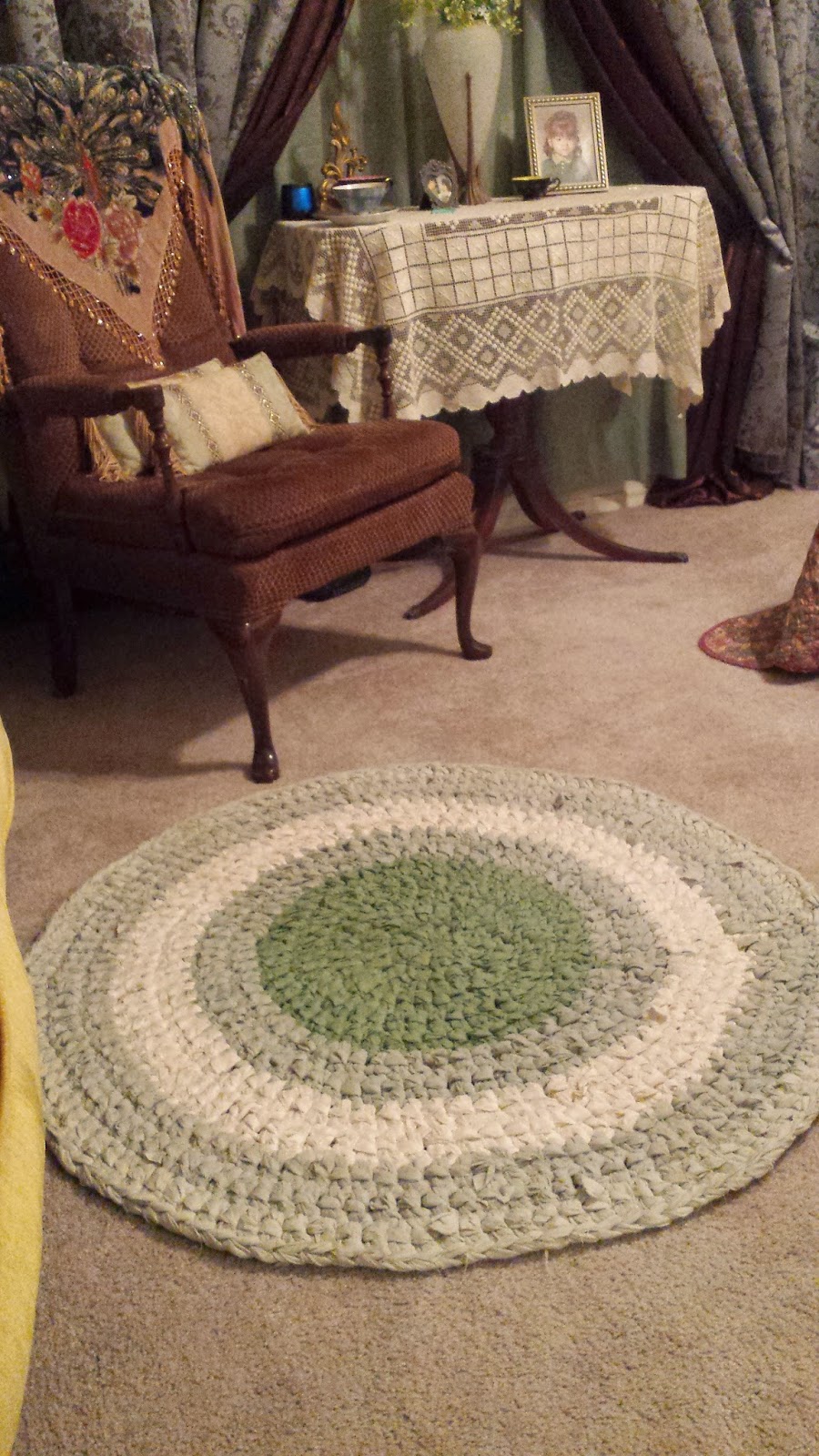 It took four king size sheets in wide strip so it's not thin or flat. I have always enjoyed having my cup of tea and resting in my private getaway room but now I can't wait to kick off my shoes and enjoy the love that my sissy gave to me. 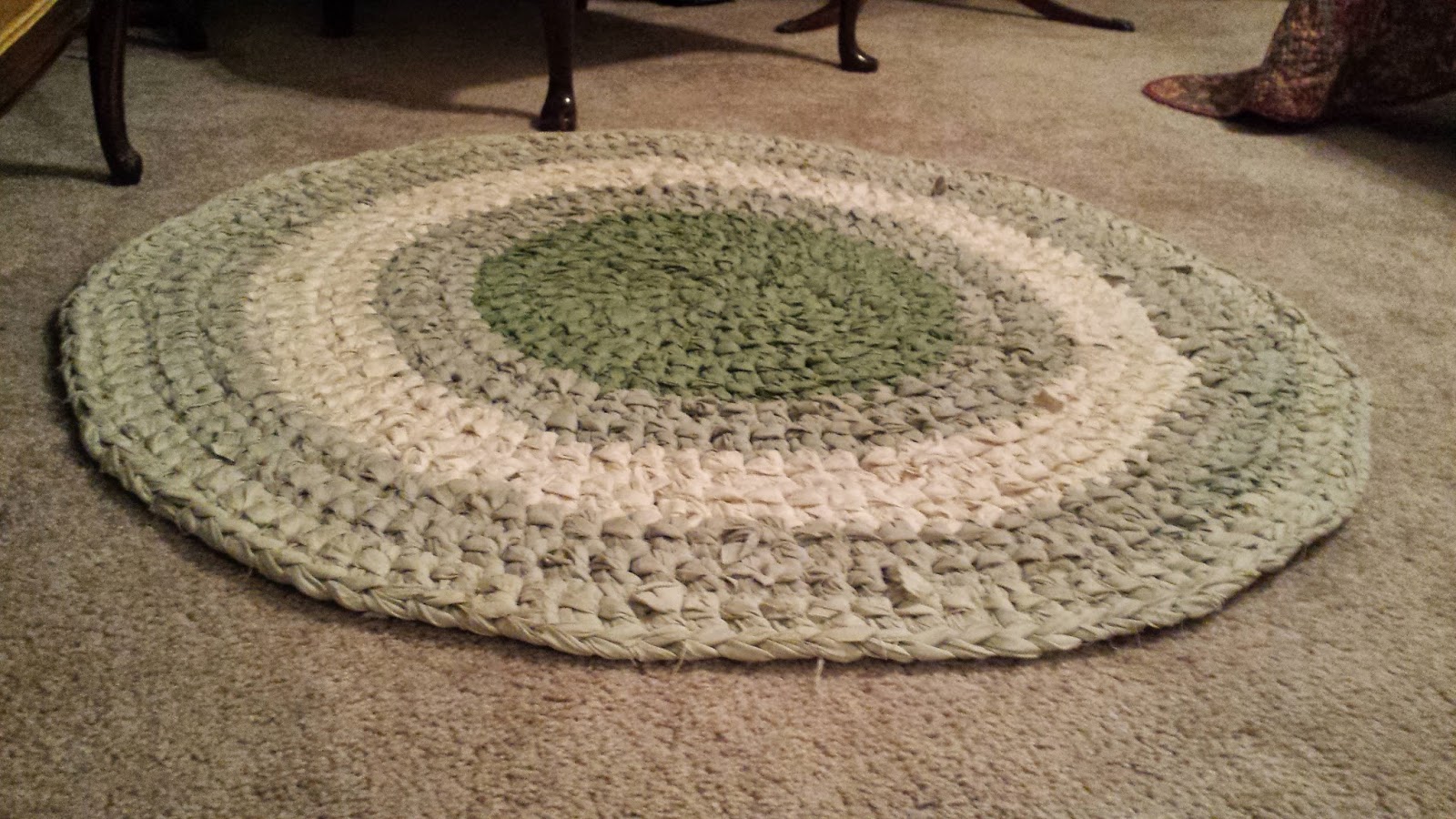 My sister wanted me to have a gift with her time and energy to know that she loves me. She has been making these rugs for her sisters so we can each have one with her love. There is much sweetness in her gift to me.

Rose, thank you so very much. I love you, too.


So blessed to hear these messages preached by great men of God that I want to share them with you, I know you will be blessed and after you hear Bro. Booker and Bro. Bass you might do as I did and thank God for the strangely wrapped gift that marked me and blessed me.

No, I didn't go to the camp meeting but I have access at this website, Apostolic_Vault. I visit as often as I can so my children and I can still hear the preacher's voice in our home.

I am posting this from my phone so I hope each link works.
God bless.