All The Noise In Empty Hallways

I wrote this bible study in storybook form a few years ago, and I wanted to share it with you. I saw Michal's despising of David and selfishness as something I did not want to reflect but kept far away from my heart. "Search me, God, that I can love as you would have me to love. I will honor You by honoring my husband whether he is here or not."
(You can find the story in the bible I added a few expressions for the story line)
2 Samuel 6:20
He danced freely and openly without any care of thought nor opinion. Every sixth step David shouted with a joyful praise unto the Lord, for the Lord had allowed the Ark of the Covenant to be brought back while in his kingship. David, with his own eyes beheld the Glory of the returning of the Ark to Israel. His dance was an offering of thankfulness and praise, for David truly loved the Lord. The people of Israel joined in the shout.

"What is all that noise going on in the streets?" asked Michal.
"It is the people they are rejoicing for the king brought back the Ark of the Lord and there is much rejoicing." came the reply.
Another voice was heard to say, "Come to the window, Madame, and see how the people dance with the king. There is much excitement going on; it is a sight to behold."
"WHAT? David has joined the people in all the raucous?" She demanded.
"No, Madame, it is not the king joining the people, the king is leading the people in the dance."

Michal arose from her lounging to look out the window at what her husband the king is involving himself to be a part of with the common people. As she leaned forward you could hear her angered retort, "Augh!"

"A shepherd boy is what he is used to being. He tramped throughout the countryside attending sheep that he never had any training on how to behave in a public role", said she in shame as she lowered her eyes with such despising she had to look away. "My father would never have shamed the family this way. He stood tall and with dignity in the presence of those of the lower class. NEVER! Never, will I let David do this to me, again. He will have to change from his boyish ways. He is no longer running in the hills with sheep but placed in a position that people are looking up too. And when he acts this way it is I who feel the shame for he lowered himself, MY HUSBAND, lowered himself in front of the people." said she.


After the celebration, David blessed the people then went home to bless his household.
So ashamed was she of her husband's worship to the Lord that when King David entered the room she went to meet him and spoke in such sharpness that David was taken aback.

"Has the king played today?" Turning to face David she continued speaking in anger, "Did you enjoy shaming yourself in front of the women of whom you are king over. Displaying and disrobing yourself in public! What a glorious sight you made of yourself, David. You must never do this again! I, as your wife, felt so much shame over what you have done. The people are probably mocking you in their homes, "The king behaved in such an UN-KINGLY manner shouting and dancing in the streets today." I would have never..." she was interrupted.
"Stop this!", said David, "What I did today, dancing and rejoicing, was unto the Lord, who chose me rather than your father or anyone from his house when he appointed me ruler over the LORD’s people Israel—I will celebrate before the LORD.
"No, David, it was shameful", said Michal.
If you think", said he, "that this was shameful, you will see I will be thus more on the morrow. And the women of which you speak will have me in honor." He turned and left the room and never visited Michal's courts again.

E-ha-e-eww!  E-ha-e-eww! E-ha-e-ewwww!
"What is going on? Why are the trumpets sounding in the streets?” asked Michal of her maidservants.
None dared to answer, and yet, all feared not to.
The handmaid panicked as she thought to herself; “Act as if you did not hear her question, "Madame?” was her reply.
"Why are the trumpets sounding in the streets? What is all the noise about? ANSWER ME or I...” she demanded!
With much fear the handmaid replied, "The king's son was born, today, Madame."

Michal, in her dark thoughts, "Every birth is announced with the blast of the trumpet , "The King has had another child born unto him!" Yet, my hallways remain quiet without the disturbance of any children and without the pitter-pattering of children's feet. The children born unto the king should have been mine. The only noise of children are those from the women who were of a lower class and had no upbringing of quality; that is why they would have him, he comes of an inferior sect. Every birthday there is so much noise!! It rings in my courts and vibrates my walls with their celebrations. How I des-pise David for he has always shamed me!”


Friend, Michal never gave birth, but God gave Michal a duty as an aunt, the opportunity to be a stepmother. Merab was Michal's sister who had passed away, her children now motherless were hung, but where was selfish Michal when her nephews were dying? She did not fight to keep the birds of prey away from their bodies. She could not love anyone but herself. (2 Samuel 21:7-12). Michal was an embittered woman and the bitterness ruled her as her constant companion. A wounded spirit separated her from her husband. "Oh! Michal, you error-ed greatly on the side of wrong, you lost forever what could have been a beautiful marriage and your children would have had a father after God's own heart. Instead, all you had left were the irritating echoes in your hallways of the joyful noise of children not your own but of others who took their place beside the king who was once your man."
“God, don’t let me reflect a Michal-spirit. I keep my heart ready for Your spirit to have reign in me.”
Sister, the bible commands of us, women
"Wives, submit yourselves unto your own husbands, as unto the Lord."
And…
"Reverence your husband."
As women, we love the one we respect.
While the bible tells a man to love his wife, the Lord tells wives to respect their husband. The reason "Why?" if a women does not respect her husband then she does not think highly of him and when a women does not consider her husband worthy of respect she will not love him but only tolerate him. She will argue every point over his instruction for the home, over spiritual decisions, he will have no say-so and she will have a despising in her heart for his authority because "he shames her" when he does not follow her decisions. The pastor's voice will be an irritation to her because he preaches, "Wives’ submit yourselves unto your husband."  Pastor Garrett once said, "A wife that thinks herself more spiritual than her husband has proved that she is not." It is neither a chore nor a bother to honor and respect your husband but a wonderful gift you have to give him. Friend, you can live happily under the message of submission.
Sister, you are being honored of the Lord to have the husband that is yours. Show your husband how honored you are to be his wife. Go ahead, Sister, for your husband, pour on the respect. 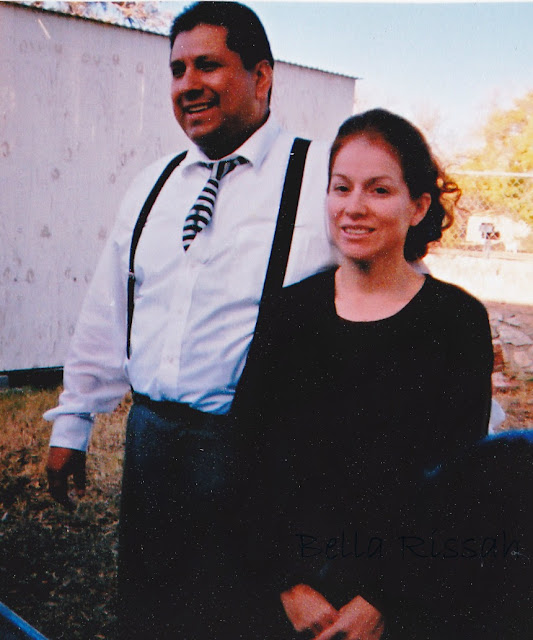 How I love Ralph. It is my honor to be his wife. I believe I respected him, but, IF I did not submit, IF I did not think him worthy of respect, just watch me pour it on. Honey, he ain't seen nothing yet.

I will share more of the bible studies I wrote if the Lord wills it to be so.
Picture taken in El Paso, Texas. It is my hope that the sharing of the Word and of "my love" are a blessing to you.
xox
Blessings,